My family and I are traveling to China to meet my new baby sister, Elizabeth YunDan.

Today, we went to the Guangzhou Zoo.

When I first got in, I had to pay more money because I was taller than Chinese boys. When we got in, the first thing we saw were parrots.

And guess what? At the zoo, they have Pandas, Koalas, and they had a train that took you through an African Safari where we saw Wilde Beasts, Zebras, Lions, Giraffes.

They also had a predator area where the tigers were at. My dad paid 10 Yuan (about 1.50 US Dollars) so Matt and I could throw raw meat for the tigers to eat.

We see the Sea of China

Today, we saw the Sea of China and we got a horse ride on the beach and it only cost 20 Yuan.

We bought a bunch of presents for everyone in the class and you'll get them on Monday, December 8th.

After we were going back to the White Swan Hotel, we stopped at a restaurant and ate lunch. After lunch, we went to a store that was a part of the restaurant. They had knives, butcher knives, swords, and nunchucks. My dad bought me a set of nunchuks.

In China, you see a lot of people in the fields working on their crops.

Today, we went to Maoming City and we went go see Dan-Dan's Orphanage and Finding Place. The Orphanage was poor.

When we got there, me and my brother got a gift on a necklace from the orphanage of a rooster made out of jade. I thought it was very cool.

Me and my brother donated toothbrushes and clothes and candy to the orphanage.

When I handed out the candies, I felt very bad for them because I don't think they get a lot of treats. When we got at a table when we first got there, they gave us a bag with the clothes that Dan-Dan was found in.

A finding place is very important because you want to know where they came from and if it is being torn down or still there. It's still very important.

Dan-Dan is what we call Elizabeth because her name was Nan Yun Dan. The way you pronounce brother in Chinese is Ge Ge. Daddy is BaBa and Mom is MaMa. Today, my Mom and Dad went to an office to sign papers to make her my sister.

Dan-Dan is 10 months old and she can already walk real good.

We went to a chinese restaurant and saw all sorts of insects for sale to eat: sandworms, beetles, waterbugs, lobsters and fish. I didn't like the food too much.

We went swimming again in the pool.

Tomorrow we check out and go to the city where Dan-Dan was born and see the orphanage where she was raised.

We started today out swimming with my Dad and brother Matt. The water was freezing, but we got used to it after about 5 minutes. Ryan, the pool is huge. You can see it in the picture below. It has a waterfall, too.


We went to lunch at Lucy’s and had a cheeseburger. It was a little sweeter than America’s. Next we went to a building and on the 8th floor we had to wait for our baby sister Elizabeth to be brought in for us.


When they brought in Elizabeth, I thought in my head “Yay!”


Matthew, you asked if our baby sister cries a lot. She doesn’t cry a lot because she is a deep sleeper.


Her nickname is Dan-Dan because her Chinese name is Nan Yun Dan. I got to hold Elizabeth second when she came.


Lizzie asks if the hotel is nice. Both hotels in Beijing and Guangzhou are very nice. We have two rooms connecting that give me and Matt our own space. Tyler asked me if China is cool. It’s fun to visit and I wouldn’t mind living here.

Mrs Snader, the KFC popcorn chicken is spicier than in the United States. McDonald’s double cheeseburger tastes the same.

Here is a video of our first day of sightseeing in Beijing.


Here is a video of the everything that happened that day.

Not much happened to day except we took a 3 hour flight from Beijing to Guangzhou and tomorrow we get our baby sister at 2pm. We got a new guide and her name is Cornelia and she’s really nice.

After we got to our White Swan Hotel, me and my brother and my Dad went to the pool at night and it was so chilly that it woke us up. I bet the pool is warmer tomorrow when it’s not nighttime.

Today we were going to the Great Wall of China. On the way there, we went to a Jade Factory (Jewelry). There is fake jade and real jade. Fake jade has bubbles in it and real jade has a natural flower in it. My brother got an Ox and my Mom got a Rat for Elizabeth and I got a turtle. A turtle means long life in China.

When we got to the Great Wall, our family climbed to the top. The Wall was built to stop invaders from attacking China. The Great Wall is 2,000 years old and over 3,500 miles long and there are many workers buried under the wall. Also, the astronauts said that the only manmade thing they could see from the moon was the Great Wall.

After lunch, we went to a Tea Ceremony where we learned about different types tea and their uses in China. I tried all the teas, but I didn’t like any. Teas are used by the Chinese to heal and make the body stronger.

Finally, we went to the Chinese Acrobatic Show. In the beginning, it was really cool because they used lasers to show a face in the air and once the face stopped talking, there was a portal and a guy walked out of it. He changed suits REALLY FAST! The next act was a bunch of people doing flips off a board that looks like a see-saw. After that, there was platform that came up out of the ground with 3 strong men and they did a lot of balancing things. I was tired from climbing the Great Wall and fell asleep during the show.

Here is a movie of the Jade Factory tour and me climbing the Great Wall.

Today, we went to the Water Cube. It was very cool. It had blue bubbles on the outside and that’s where Michael Phelps won a lot of medals. Guess what? It’s surrounded by water.

After the Water Cube, we saw the Bird’s Nest. It was round and closed for tourists. The Olympic Village is where all the athletes stayed during the Olympics. There are a lot of apartments there and they now cost over $350,000 each!

Next, we went to the Forbidden City. It was so special to China because their Emperor lived in there. It was a secret city. The town is really old because it was build over 600 years ago. It also surrounded by a moat of water. It is cool because all the building have golden roofs. The have huge iron pots that hold water. The Emperor had a crystal tomb.

After the Forbidden City, we went to the Silk Factory. The get silk from silk worms and one thread from a silk cocoon is over 1,500 yards long! A Silk thread is 1/10th the width of a human hair and very strong. They make bed covers out of silk and also make clothes, pictures and rugs.

While Mom got a foot massage, Dad, Matt and I went to Pizza Hut but we didn’t get any service so we went to KFC.

For brekfast we hade a turky sandwich. For diner I hade noddles. For lunch I hade chicken. We're staying at the hotel Jianguo. Today I hade McDonalds for dinner. When I was on the plane it was turning Day and night, so it's the 20th for us.

Here I am writing in my journal at the hotel. 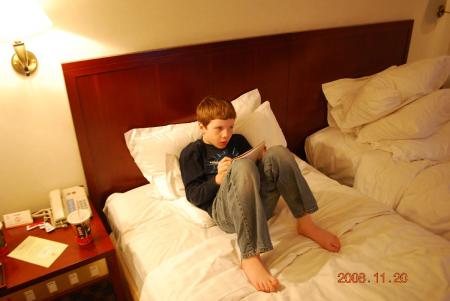 Click here to see more pictures from the day