I am traveling to China to meet my new baby sister Elizabeth YunDan. She was born on January 21, 2008. I'm going on November 19th and getting back on December 5th. I'm traveling with my family. I'm going to visit the Great Wall, the Forbidden City and 2008 Olympics.

A Day at the Safari Park

Today we went to the Guangzhou Safari Park. My favorite animal was the White Tiger because it is really rare. I got to feed the Bengal Tigers some raw meat. They only have them in Las Vegas and China.

I liked it on the mobile train as it took us around the Safari Park. We saw Black Bears, Zebras, Wilde Beasts, Giraffes, Lions, Elephants, Hippos and Tigers.

China is famous for it's Giant Pandas. Giant Pandas only eat bamboo and they eat a lot. Look how much this guy is taking to their cages.

Here is a picture of a Great Panda.

We also saw 12 Koala Bears at the zoo. Koalas only eat Eucalyptus leaves. Eucalyptus is poisonous to most animals, but not the koala.

Today, we went to the Sea of China and spent time on the beach.

After the beach we went back to the White Swan Hotel. We stopped for lunch and visited a store that had all sorts of knives, blades, nunchucks and big butcher knives. My dad bought me an 8 piece torture tool.

China has a lot of agriculture and the farmers work really hard to grow their crops and sell them for money for their family.

They use a lot of bamboo in construction projects because it is better for the environment and it can be re-used. They use bamboo from 6 to 12 stories high.

We went to the Orphanage today and gave the Director and Assistant Director presents such as toothbrushes and clothes.

For the nannies we gave them lipstick. We fed the older babies candies. I felt really sad because this is all they have in their life. We saw a lot of older children with cleft palates and they need surgery and families to adopt them. Cleft palate is a condition where the roof of the mouth doesn't come together completely which leaves a hole between the mouth and the nasal sinuses.

While we were at the orphanage, we received Dan-Dan's finding clothes. These are clothes she was wearing when they found her.

We also visited Dan-Dan's finding place which used to be a wedding picture studio, but they moved about a month ago.

We Got Elizabeth Today!

Today, we went swimming and the water temperature was 18 degrees Celsius. This is the same as 64 degrees Fahrenheit. It was cold, but we got used to it after about 5 minutes. Here's a picture of us swimming that day.


We went to Lucy's for lunch and got a free handbag with our purchase. Then we went to the CAB office and waited for Elizabeth to arrive. The Fuhrman's did the same thing. Here is a picture of the babies arriving.


When I first saw Elizabeth, it looked as if she was a happy person.


Here is a picture of the first time I got to meet Dan-Dan.


Here is a video of the everything that happened that day.

Travel from Beijing to Guangzhou

The trip took 3 hours by plane. It wasn’t as bad as the 13 hour ride in the beginning. When we arrived in Guangzhou, we met our guide, Cornelia. We are staying at the White Swan Hotel and we have two rooms connected by a door. It is the first 5 star hotel in Guangzhou. We went out to a Thai restaurant for dinner where I asked for a banana shake and my waiter brought me a banana. We saw other families with their new babies and we discussed how we were going to get ours tomorrow.

After dinner, my Dad, Tim and I went out for a swim in the outdoor pool. It was cold, but we all got used to it and had some fun. It will be better tomorrow when the sun is out.

Today we went to the Jade Factory. It was really exciting because they taught us how to tell the difference between real and fake jade. Real jade has a cloudy look that they call the Jade Flower and fake jade has air bubbles. I got a figure of an ox because I was born in the Year of the Ox. I saw a huge eagle made out of jade. It cost over $200,000 to buy.

The Great Wall is over 3,000 miles long and the astronauts said it is the only man made thing they can see from the moon. It was built over 2,000 years ago.

I only climbed a portion of the wall. I had to rest a lot and had no water for the climb. I finally got some water when I made it to the top. It must’ve taken the workers a very long time to build it. The portion of the wall that we climbed is built on a mountain.

After lunch we went to learn about the history of different types of tea in China. There are five different types of hot tea. I really love the Oolong tea because it gave me a lot of energy. Teas are used to heal people and help the body in many ways.

After the tea lesson, we went to see the Chinese Acrobat show. I liked the finale best. It was really cool when a platform rose out of the ground and another rose out of that. The platform had 3 men on it who were real strong and did a lot of cool stuff. Some other acts included bicycles, lasers, men doing flips on trampolines, guys jumping through hoops, and a bunch of other cool acts.

Here is a video of the Jade Factory Tour and Climbing the Great Wall.


We were tired and just ate at McDonalds because we knew we had a long day the next day.

Olympic Green: We went to the Water Cube today. We got tickets as souvenirs. Michael Phelps won 8 gold medals, all from swimming events. 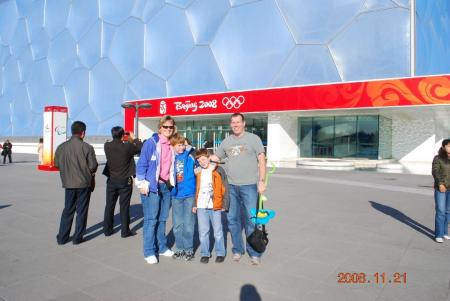 Next, we went to the Forbidden City. The Forbidden City was finished in 1420 and was the home to the Emperor, his wife, and family. There was a place for final preparations for ceremonies. There were lions that protected the palace and the Temple of Supreme Harmony. The Forbidden City is very, very big. So if you have to go to the bathroom, make sure you go before you get inside. The bathroom that I used was a 4 Star Bathroom. 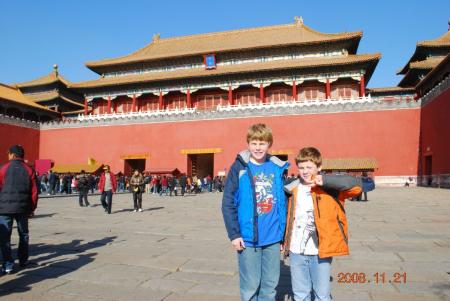 We went to lunch at a Chinese Restaurant where we had a private room. They came to the tables with a platter of different foods and sat it on a revolving disc of glass and I spun the glass to get whatever food I wanted. I used chopsticks to eat the food. I really like the chicken that was covered in a yellow sauce.

Tiananmen Square is the home to the tomb of Mao Tse Dong, who was viewed as one of the great leaders of China. He died in the late 70’s and his body is on public display. Tiananmen Square is the biggest public central square in the world. Over one million people can fit in there at a time. We took a group picture. Also, people wanted to take pictures with me and my brother Tim. They like blonds. There was a protest of some sort in the square and the guards came over to see what was happening and took the protesters away. 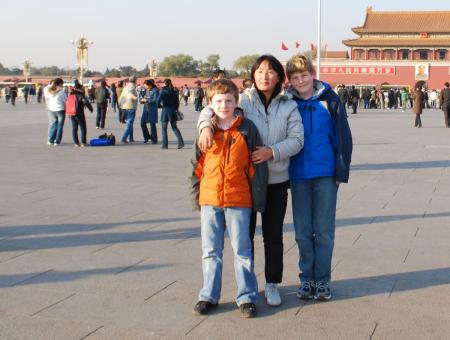 My mom and the Fuhrmans got a foot massage while my Dad, me and Tim went out for dinner at Pizza Hut. We didn’t get any service and I was about to fall asleep, so we left the restaurant and went to KFC.

Here is a video of our first day of sightseeing in Beijing.


Tomorrow, we visit the Great Wall.

We arrived in Beijing today. Here is a picture of me and my brother Tim at the Beijing airport.

We took a long bad bus ride to the Jianguo Hotel. McDonalds, KFC and Pizza Hut are right next to us. Me and my Dad went to O'Briens. My Mom and Tim went to McDonalds.

Here I am writing in my journal for this blog.

Did you know that there is 15 million people in Beijing alone? 9 million of them ride or own bikes. Tomorrow we will be at the Forbidden City.

We left for china today. We first dropped King off in the kennel. We took a taxi to the airport. The trip took 13 long, horrible hours. The 19th turned into the 20th. Tomorrow we are touring Beijing.

I'm excited about going to China!

The plane trip will be 13 hours. I'll be doing my schoolwork, playing outside, and going to the orphanage where she has been raised. Elizabeth was found at a wedding photography studio 2 days after she was born.

I'm going to work with my Dad to post pictures and video of our trip. Please feel free to add comments and I'll read them during the trip. When you are asleep, we'll be awake.